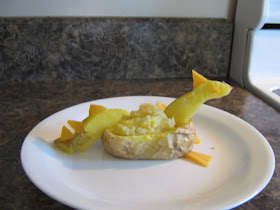 After seeing a cute, baked potato, dinosaur on the Love Potatoes site (don't ask me what I was doing there, sometimes my clicking gets out of control), I thought I'd be clever, and carry our dinosaur theme on into dinner. Since I'm new to potato art, I decided to make a prototype at lunch, for the Man of the House, to try out.
The Love Potatoes dinosaur was pretty fancy, with pepper scales, olive eyes, and creamed cauliflower filling. My children are not big fans of any of those things, so I decided to keep it simple, and use cheese for the extra details.
Trying to follow the directions for the dinosaur, I started with a potato. 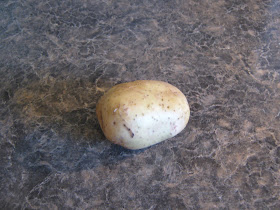 I baked it in the microwave, and sliced a third of it, off the top. 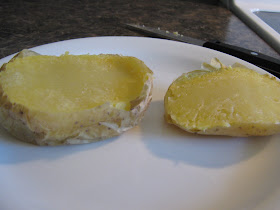 I cut the smaller slice, into three pieces, trying to shape two of them to look like a neck with a head, and a tail. 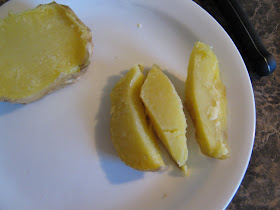 Those went into a 450 degree oven, brushed with olive oil, for about 15 minutes, until crisp. 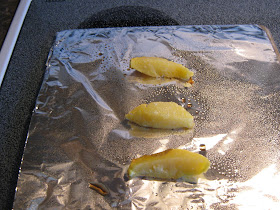 In the meantime, I hollowed out the bottom of the potato, and mashed the filling with sour cream, and cheese. 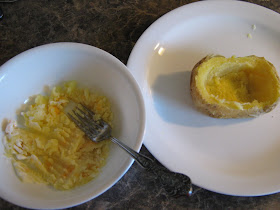 I cut some additional triangles, of cheese, for feet, and scales. 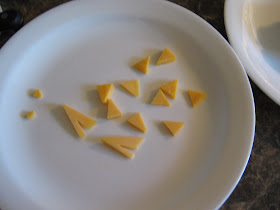 Then, I returned the filling to the potato shell, and placed the "feet", underneath the front end. 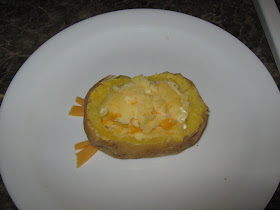 Once, the potato slices were browned, or at least starting to get crisp, I removed them from the oven, and stuck the head, and tail pieces into the filling. 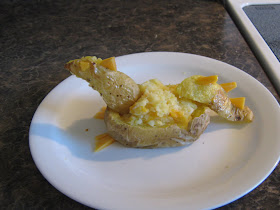 Finally, I added the cheese scales, and eyes, which basically I just pressed into place, letting them melt enough against the hot potato, to stick. It was easy enough with the eyes, but the scales were tricky.
I proudly presented my husband with his dino-lunch, only to have him ask me, with a crooked smile, if we were starting a unit study on Scotland.
I think I'll go back to baking cookies! But then, a unit study on Scotland, might not be a bad idea, after all. Loch Ness, here we come.
It's great to be a homeschooler.
An Almost Unschooling Mom at 2:22 PM
Share