Going on a Beaver Hunt

We read that Anna over at Mouse Grows, Mouse Learns, was studying beavers, and their dams, this last week. So, we thought maybe we could get a picture of the one that lives in our local fishing hole for her. We knew it would be tricky, because beavers are generally nocturnal, and terribly shy, but it was out swimming around on our last few fishing expeditions, so we were optimistic. 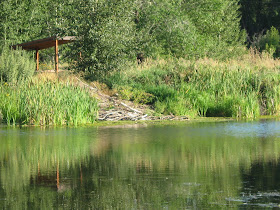 However, the beaver proved extra shy this weekend, and although after several stops by the pond, we did finally get a glimpse of it, it stayed smartly out of camera range, bobbing, and diving in the water, emerging for a second here, or there to stick its tongue out at us (okay, it wasn't really sticking its tongue out, but it might as well have been).
Not being able to see its tail, we got in some discussion as to whether it was really a beaver, or a muskrat. They look very similar in the water. The children assured me they've seen its tail in the past, and it is a beaver. Just to be sure we went looking for signs.
We didn't see any scat, or tracks, not a big surprise given the amount of people, and canine traffic around the pond, and I'm not sure we would recognize a scent mound, but you can read about these beaver signs here, at the Bear Tracker.
What we did find, other than the fact the den, pictured above, is made of sticks, and not cattails, and vegetation, like a muskrat's would have been, was the telltale gnawed on trees. 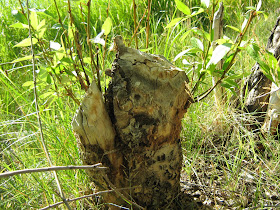 And, one very obviously beaver felled tree. Beavers like to eat the bark of aspen, birch, alder, and willow trees. They gnaw all the way around the tree, to knock it down, making an hour glass shape, that eventually breaks in half, like our tree pictured below. 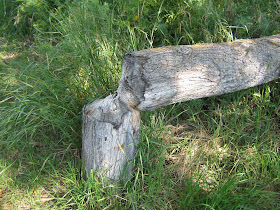 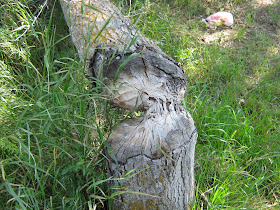 We have heard of a spot in the woods about an hour away, where there are a number of beaver dams, that have turned a small creek into a marshy area, great for Moose, and other animals. We might yet check that out, but this weekend, after a Saturday spent in the Helena sun, we opted for a Sunday afternoon nap, instead of a trip into the woods.
North American beavers live all over the United States, and Canada. Have you seen one lately?
It's great to be a homeschooler.
An Almost Unschooling Mom at 6:08 AM
Share