I declared it "summer break" yesterday.

It was sometime in the morning, between running C (age 12) to be measured for her costume for her part in a summer musical and learning that E (age 14) and C had volunteered to help build sets (which is going to be a great learning experience, because this particular troupe goes all out on their sets), helping D (age 16) put a resume together, "helping" T (age 21) rescue a baby bunny (we have two nests of them in our backyard) from a basement window-well... 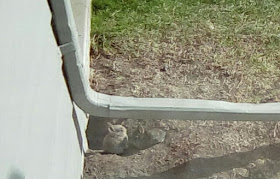 ...retrieving A (age 18) from work only to accompany her straight to a decorating session for this year's homeschool prom, and all the while compiling a packing list in my head (I really need to get it down on paper) for E (who is heading out on a multi-state road trip in a couple of weeks) and A (who is heading to China).

We simply don't have time to do school anymore this spring.  Not that I'm sure I know what's school and what's life in house these days.  I might have said it was our formal math lessons, but D announced that he's enjoying where he's at right now so much he'd like to see it through a while longer on his own.

E will be studying American history and geography in preparation for her trip.

A will be cramming in as much Chinese as she can (and hopefully a little history and geography there too).

T has already declared that with his classes done for the summer (his university finals were two weeks ago) he has several books he wants to catch up on, an exercise program to put into action, and a new Japanese language app he'd like to try out.

C bought herself a hardback journal for a story she's been wanting to write, and she has an upcoming father-daughter camping trip where she should be able to get in some fishing, target practice (and gun safety lessons) and lessons in campfire cooking.

And that's not to mention the upcoming weeks of summer camp, driver's ed, a Bakery Boss Jr. day camp, CPR for babysitters, a couple of concert, and Shakespeare in the Park.

Honestly, I had to chuckle when my youngest two celebrated the announcement of summer break and called all their friends to spread the good news.

It's great to be a homeschooler.
An Almost Unschooling Mom at 5:53 AM
Share