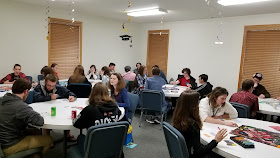 We decided to throw A (age 18) a simple game day style party to celebrate her graduation.  At least it sounded simple to begin with.  That was before I saw her guest list, and realized we could have anywhere from 5 to 30 teens and twenty-somethings showing up.

She was hoping for a game where everyone could play together.

After sorting through our games we quickly realized, that other than Bunco (which we have not had good luck playing with the younger crowd) or something like charades, we don't have any games that can accommodate so many players.  We do have an unusual number of differently themed Monopoly games (Star Wars themed, Cheater's edition, Bible-opoly, etc.) though, and that gave us an idea.

For the party, we set our games up, ready for four players at each table. 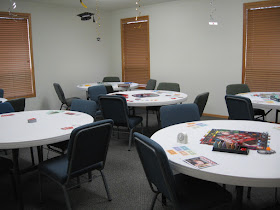 We tried to pick games that each had something of quirk to them, rather than just themed versions that still played exactly the same as the original game.

At each table we set-up the boards, picked and placed the four tokens, readied the bank (if the game had one), and divvied out the initial allotments of Monopoly money to each player.

In front of each player's chair, on the tables, was a colored star - a red, blue, green, and yellow for each table, representing the four teams for the evening. 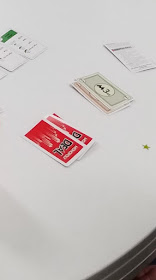 We assigned each of the tokens on the boards (ahead of time) a color, and wrote out a key on a white board, visible from anywhere in the room. 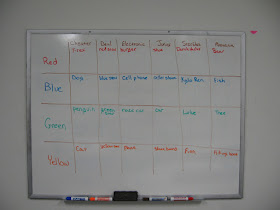 After the players were all seated (with adults filling in, until late-comers arrived), we gave them matching stars on their hands, so they would be able to keep track of which team they were on, know where to sit when they moved tables, and be able to look-up at the key to know which token was theirs.

Our family took seats on the same team so, theoretically at least, there would always be at least one person at each table who was familiar with the game.  This went out the window a bit after we had to set-up a seventh table/game (we had initially planned for five tables, with a sixth set-up as a back-up).  We had the rules in easy reach on each table though, so it all worked out.  I can't say the games were played correctly all evening, but they were played.

Once we had everyone seated and ready to play, we set a kitchen timer for 10 minutes. 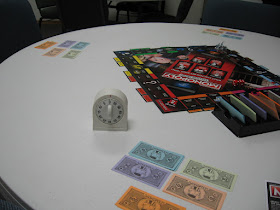 Each table took a few minutes to orientate themselves to their games... 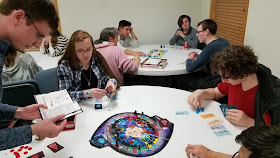 … and then started to play. 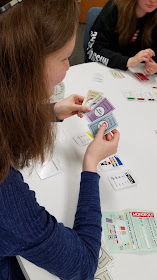 At the end of the ten minutes, when the timer went off, the tables finished off whatever turn was in play, and then laid down their cards or pieces, as neatly as possible, in front of their chairs, leaving their tokens in place on the boards. 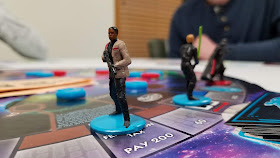 The blue and red teams changes tables, moving to the next table over in a clockwise direction, while the yellow and green teams moved counter-clockwise (it was chaotic, but manageable)... 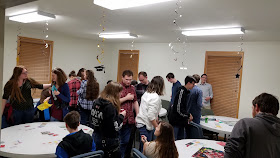 … the timer was reset, and play continued.  That way, every ten minutes, players were playing a different game, with two new people at their table.  As games were won, the winner called out the color of their team for the win, and we marked them on the board.  Then, that table reset their game and continued playing.

Prizes (packs of fake mustaches) were awarded, and everyone moved one room over for cake, snacks, and a short, student made video of our grad's high school years. 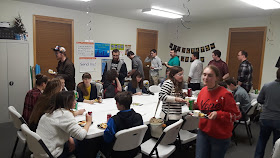 Everyone seemed to enjoy themselves, and our grad had a fantastic time, so I'm counting it as a success.

It's great to be a homeschooler.
An Almost Unschooling Mom at 7:50 AM
Share