Remember the burned out finger lights I mentioned earlier? 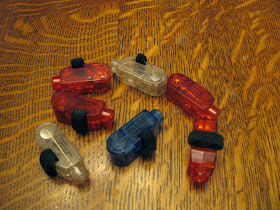 They weren't much good for making colored shadow puppets, but I figured as long as we had them out, we might as well tear them apart, and figure out what was wrong with them. 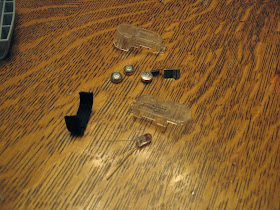 We tested the little LED's against the battery pack... 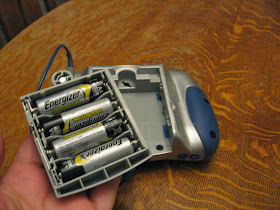 ...from our Leapster, and discovered a number of them still worked.

Most of the little button batteries still worked too, so it must have just been that the plastic casings had become loose, and weren't holding everything together tightly enough. 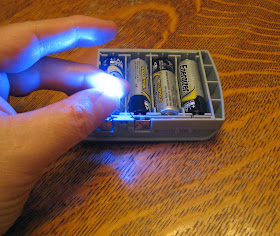 No matter, because now we had a bunch of LEDs (light emitting diodes) loose, and ready to play with.  We just needed something to decorate... 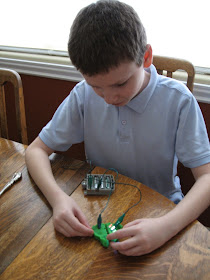 ...and as we just happened to have a can of green Play-doh handy, we formed a quick Christmas tree, cut it in half down the middle (if the two sides touch the lights won't work)... 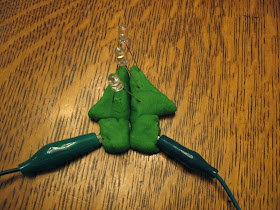 ...added our lights (all running the same polar direction,  + and - wise), and plugged the tree into the battery pack (DC power is safe for this, AC power would not be - I think) with insulated alligator clip leads (we keep a number of these on around...they're so handy), with the positive on one side, and negative on the other. 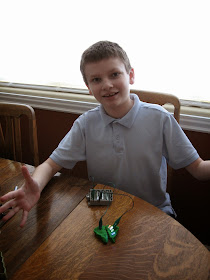 We also played around a little, adding a strip of plastic wrap to the center of our tree, so we could connect the two sides without turning off our lights (LEDs are very bright, by the way, you don't want to stare directly at them). 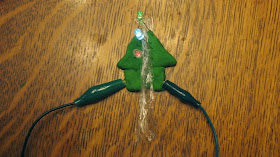 Then, the children started working on a Christmas wreath, creating a string of lights, and balls of Play-doh.  Very quickly, though, they ran into a voltage drop problem.  When they tried to string three lights together, the third would not light... 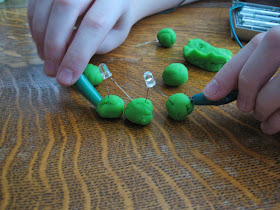 ...even though they were able to light four together, when only using two balls of dough. 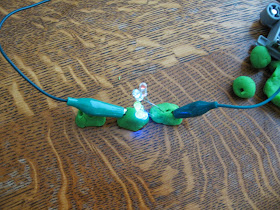 I imagine there's a lesson in Ohm's law in there somewhere, but I'll need to brush up on my high school physics before we tackle it together.

However, with my mother flying in for a pre-Christmas visit this evening, and the gnome-bot still refusing to fold laundry, it will probably have to wait until after the holidays.

The really great, and terrible, thing about 30 second science experiments is they tend to lead directly into deeper study, that lasts a lot longer than half a minute.
An Almost Unschooling Mom at 8:28 PM
Share