Wonderful Christmas snow is falling, steadily, outside again today, making it a perfect day to stay inside, and do a puzzle. Or... you know...build a popsicle doll house, which is just like doing a puzzle, only there's a prize at the end. 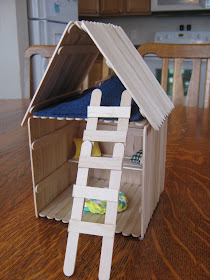 I've actually been Googling about for the last couple of weeks, looking craft stick projects, that might spark the children's interest, for those days ahead, when we're stuck inside. I had noticed a couple of houses. They looked promising, but I wanted to search a little further.
Then, Crafty Crow linked One Crafty Mumma's craft stick doll house, and she linked a house from A Little Hut, also via Crafty Crow, I think. And anyway, between the two, I had a pretty good idea of what might work for us.
One Crafty Mumma mentioned using hot glue, but I wanted to try plain old school glue, so the kids could follow up with more houses on their own, if they wanted (as soon as I get more craft sticks).
The house I made used 111 craft sticks - 14 on each of the walls, ceiling, and floor, with one extra added to the back wall (because of a mistake, but I'll tell you about that in a minute), 15 on the two roof pieces, and 1 for a ridge pole, 5 for the ladder, and 4 for a bench inside the house. 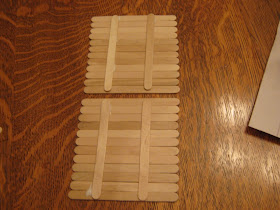 For the walls, floor, and ceiling, I laid out 12 sticks, side by side, and glued two sticks across them. This is where I made a bit of a mistake, because I should have trimmed the ends off the cross sticks, to make them a little shorter, so they wouldn't be in the way, when I put the walls together, but it all worked out in the end.
I made sure the cross sticks for the side walls matched up, so I'd be able to use them to support sticks for a bench, inside.
When I glued the walls, and floor together, after the glue on the cross sticks dried, I used an extra glue bottle to support them, until they dried completely. 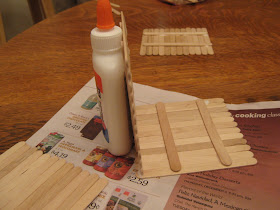 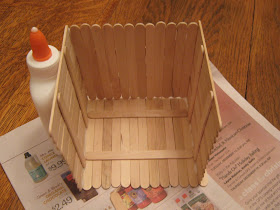 Here, you can see the extra stick I added to the back wall so the cross sticks wouldn't get in the way. 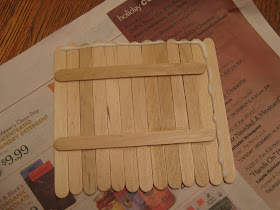 It sticks out from the side of the house, but isn't too noticeable, and as I said, could be avoided by trimming the cross sticks. Once the side walls were all glued together, and completely dry, I ran a line of glue around the top edge, and sat the ceiling piece on, letting gravity keep it in place. Then, I worked on the roof. 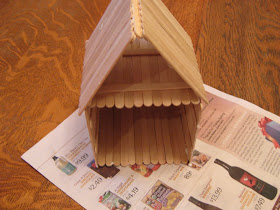 The roof pieces were 12 sticks across, just like the walls, but I used three cross pieces, one right along the top edge, and placed the bottom ones a little lower on the pieces. Then, I glued an extra stick, overlapping, on the top cross stick, of one of the pieces, to act as a ridge pole. 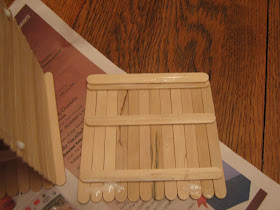 Finally, I glue the two pieces together, on top of the house, using the lower cross sticks, to catch on the ceiling piece. 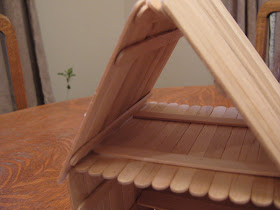 All that was left then, was to glue sticks between the cross sticks on the back of the side walls, to make a bench, add a few homey touches... 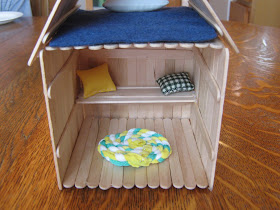 ...and a ladder (Did you know you can cut craft sticks with children's scissors?)... 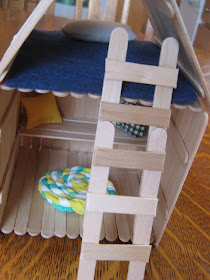 ...and the house was ready for the Polly Pockets to move in. 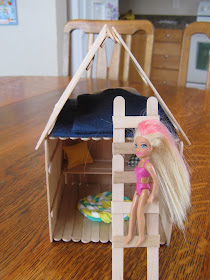 The glue does seem to be holding well, even when the house is carried by its roof, though knowing my children, there will be repairs ahead. They already have lots of ideas for new, and improved designs to try themselves, so I think this could end up being the winter of the craft stick village, at our house.
But really, I made this in a morning (mind you I was up pretty early with a sneezing fit), with a pile of craft sticks, and some glue. Think what a nice, last minute gift it could be, packaged with a paint set, and some scrap fabric, wrapped nicely with a little sewing kit, and a bit of cotton, for a "decorate your own doll house" sort of thing.
It's great to be a homeschooler.
An Almost Unschooling Mom at 2:08 PM
Share