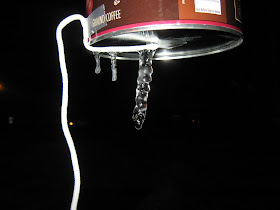 With the temperature remaining in the teens (that's Fahrenheit), we continued experimenting with the water can icicle project, we started for Science Sunday, and finally met with some success.
First, we tried different temperatures of water, but that didn't seem to make a difference.

Then, we filled the can partway with snow, thinking maybe when the sun hit the can, and started melting the snow, it would drip down the string, and add to our icicle. It did a little, but mainly it just remained frozen in the can. 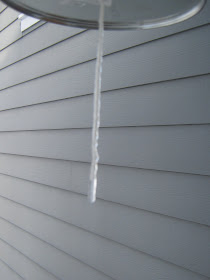 We did end up with an icicle string though, which was kind of fun. 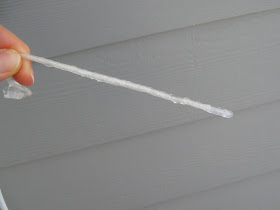 Finally, we decided to change the way the string was hanging. We used a shoe lace, because our initial thought was to thread it up, through the hole, and then tape the free end across the bottom of the can.
Our shoe lace was too big for the hole though, so we cut it in half, and taped the cut end over the hole, running it across the bottom of the can, to the side, as shown, so the water could run along the string, and drip down. Then, we poured a couple more glasses of water into the can, and waited. 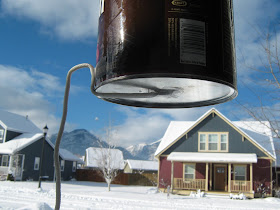 That seemed to do the trick. 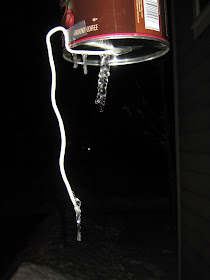 We might not have gigantic icicles, but we have a good beginning for the amount of water we put in. But, the really funny thing was what was going on just above the can. Remember how I said we don't usually get icicles on our house... 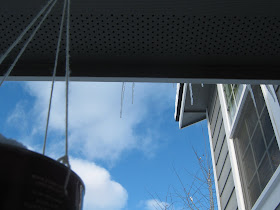 That's the eave just above the can (which allowed us to cross off heat from the house, as being what was keeping our icicles from forming). And, that isn't all. Below is the view out our kitchen window. 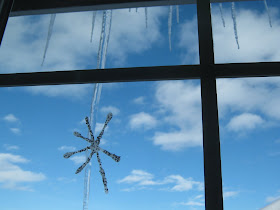 Can you believe it?
It's great to be a homeschooler.
An Almost Unschooling Mom at 7:47 PM
Share