What Makes a Pop Rock Pop? Kitchen Science for Kids

There's no Science Sunday link up this week, but I already had a project planned, so I decided to go ahead with it. 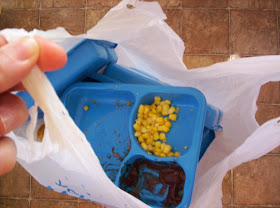 While the man of the house was out of town, I fed the children on Kid's Cuisines, Poptarts, and whatever else was fast, and easy. And, while I know it wasn't economical, or nutritious, it did lead us to some fun scientific investigation. Oh, and just in case you're terribly horrified, don't forget that apples, bananas, string cheese, and yogurt, are also fast and easy. We may have even had a Brussels sprout, or two, so no need to call the nutrition police!
The Kid Cuisines in question, were the kind with sprinkle covered, pudding desserts. Only ours didn't come with sprinkles, they came with tiny packets of Pop Rocks. While, I can't imagine enjoying pudding laden with crunchy, popping candies, the kids ate it up. And, mid-way through, came the inevitable question, "What makes Pop Rocks pop?".
I found a pretty good explanation here, at How Stuff Works. Apparently, the Pop Rock candy is just a standard hard candy, that has been injected with carbon dioxide gas at 600-psi. Then we learned from Steve Spangler, that psi stands for pounds per square inch. At any rate, when you break the candy, by biting it, or letting it dissolve in your mouth, you release the high pressure carbon dioxide bubbles trapped inside, and they make a popping sound.
I picked up a couple of extra packages of the candy, for our experiments today. 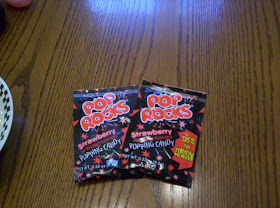 First of all, we looked at the candy through our magnifier, to see the bubbles. 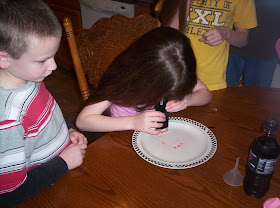 Then, per Steve Spangler, we crushed a few in a dish. They popped, as the gas was released, just like they do in your mouth. 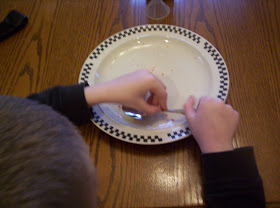 We put some into a balloon, and attached it to a bottle of cola, to see how much carbon dioxide would be released. 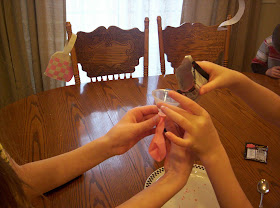 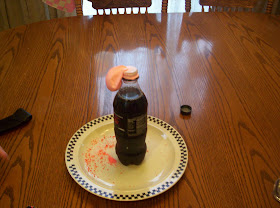 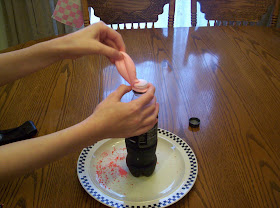 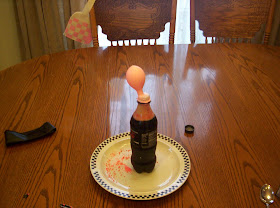 We talked about the fact that what we were witnessing was a physical reaction, and not a chemical reaction, like what we've seen before with baking soda, and vinegar. Nothing was being changed chemically, the pop was still pop, the candy was still candy, but as it dissolved it released the trapped gas, which rose to fill the balloon.
The children tasted the pop, and discovered that it was, indeed, still pop - kind of strawberry flavored pop, but still pop.
I suggested we try the experiment again, but with water, to get a better sense of how much gas the candy actually contained. But the children decided they had had enough science for one day, and would rather just eat the candy. 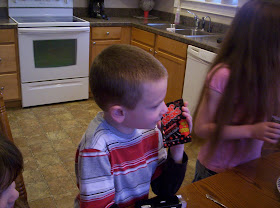 It's great to be a homeschooler.
An Almost Unschooling Mom at 3:03 PM
Share